2)  In the bowl of an electric mixer fitted with the whip attachment, whip the egg whites and sugar on medium speed until well incorporated and the sugar is nearly dissolved. Add the vanilla and almond extracts and salt; mix to combine.

3)  Stir in the coconut by hand, then pour the mixture into the prepared baking dish. Press into an even layer.

4)  Sprinkle the almonds over the coconut and press gently to secure.

5)  Bake until the coconut begins to turn golden brown at the edges and the almonds are toasted, 20 to 25 minutes. Cool to room temperature.

6)  When the coconut mixture is cool, drizzle the melted chocolate all over the surface. Transfer the pan to the refrigerator and chill until the chocolate is set.

7)  Slice into 12 even squares. Store in an airtight container until ready to serve, up to three days.

Eating Chocolate Gets Another Thumbs-up for Heart Attack, Stroke Prevention 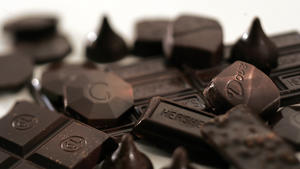 More good news for chocoholics: New research has found that devoted consumers of chocolate — including some who consume the equivalent of about two standard candy bars a day — are 11% less likely than those who eat little to no chocolate to have heart attacks and strokes, and 25% less likely to die of cardiovascular disease.

That news emerged from a long-running British study that tracked nearly 21,000 adults in and around Norfolk, England, for an average of 12 years, making frequent surveys of their consumption habits, lifestyles and health. Those in the top one-fifth of chocolate consumers owned up to eating the equivalent of about a half an American-sized candy bar; those whose chocolate consumption landed them in the bottom 20th percentile averaged a paltry 1.1 gram per day.

Those in the highest chocolate-consuming group not only had lower rates of heart attack and stroke, but they also had, on average, lower body-mass indexes, lower systolic blood pressure and inflammation, and lower rates of diabetes. They also tended to exercise more.

The study was published Monday in the BMJ journal Heart.

Those findings jibe with a welter of other “observational” studies, those that track people over lengthy periods and draw links between some factor or habit or input — in this case chocolate — and a specific outcome. Indeed, the authors of the Norfolk study also lashed together the findings of nine other such studies — a so-called meta-analysis reflecting the outcomes of 159,809 people — to undergird and provide further context for their findings.

But Dr. Farzaneh Aghdassi Sorond of Brigham and Women’s Hospital in Boston says it’s time for such observational studies to give way to trials that probe deeper questions: Is it chocolate, or something else that comes with a chocolate-eating life, that makes people healthier? And if it is chocolate, what is it specifically about this long-consumed bean that confers better health?

Studies like this one, Sorond says, can’t draw a clear line of cause and effect between eating chocolate and better health.

“Causality is the issue that remains unanswered and that’s going to have to be explored through clinical trials and interventions,” said Sorond, whose research has shown that when elderly people at high risk of stroke and dementia were given high quantities of cocoa to consume, the blood flow to their brains improved.

Sorond noted that in the current study, authors did little to distinguish grades of chocolate — and thus, the cocoa content of that chocolate — in their reckoning. Much of what was reported consumed appears to have been milk chocolate, which contains low levels of the plant flavonoids in cocoa that many researchers have focused on as chocolate’s beneficial ingredient.

That makes the findings all the more perplexing, she said, because “the brown stuff that is sweet doesn’t necessarily have any chocolate in it.”

“Are we really chasing the right thing focusing on the flavonols?” Sorond asked. “Or is there something else? Does chocolate consumption represent a socioeconomic status or some other kind of healthy factor? This paper underscores the issue we face.”

Such work is underway on a broad front, with scientists, confectioners and pharmaceutical companies all vying to play a role in chocolate’s next chapter.

Sorond says that may take four to five years to produce results, so it may be best to sit back, crack open a bar of dark chocolate and take heed of the advice dispensed by the authors of the latest research: “There does not appear to be any evidence to say that chocolate should be avoided in those who are concerned about cardiovascular risk.”

Millie’s One a Day

Eat More Chocolate!    Make it organic, raw, dark and from sustainable sources that are Free Trade!

New research has found that devoted consumers of chocolate — including some who consume the equivalent of about two standard candy bars a day — are 11% less likely than those who eat little to no chocolate to have heart attacks and strokes, and 25% less likely to die of cardiovascular disease.

Chocolate is rich in antioxidants, is a powerful euphoric and is a great antidepressant.

Here are my favorites;

Your Brain on Chocolate- It Has to be DARK!

Cocoa has the potential for numerous beneficial effects on the brain.

Post published by Emily Deans M.D. on May 31, 2015 in Evolutionary Psychiatry 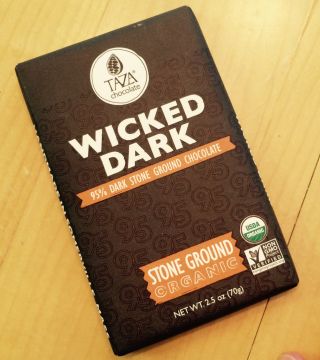 Chocolate, a fermented extract of the seed pods of the Theobroma cacao plant, is one of the world’s most popular foods. Given the caffeine, theobromides, and rich number of flavanols in chocolate, it’s no surprise that cocoa has been used as a medicine for at least 3000 years for varying conditions such as fatigue, rheumatism, and even syphilis*. Could these chemical compounds have a beneficial effect on thebrain?

If we look at observational studies(link is external)tracking chocolate consumption anddepression, the outlook is gloomy, with more depressed individuals reporting consuming more servings of chocolate per month. An older study linked consumption of chocolate to a higher suicide rate (1). The quality of chocolate is certainly at issue here…highly active flavanols and caffeine are found in the cocoa itself, so white chocolate will have none, and sweeter milk chocolates have far less beneficial compounds than rich quality dark chocolate. Many chocolate snack products historically contained trans fats, which are linked with detrimental effects in the brain. Other studies have famously linked chocolate consumption with better cognition. Even the number of Nobel Prizes awarded in a country has a positive correlation to the amount of chocolate consumed(link is external). These studies are a good example of why observational data is good at tracking trends but can’t tell us anything about causality. Does chocolate cause depression, or is a plate of brownies the first thing you reach for when you are feeling blue? And does coffee make you smarter, or do wealthier countries with higher chocolate consumption have a greater number of Nobel winners?

Controlled trials of cocoa (the unsweetened powdered magic left after the fermentation and drying of the cacao pods) tell us more directly about the effects of chocolate on the brain, and give us the actual mechanism as to why chocolate might be beneficial. First, the flavanols in cocoa (and also many other fruits, berries, coffee, and tea) activate anti-anxietyreceptors while caffeine has direct antidepressant effects. That means you get the benefits of a stimulant that is calming at the same time…a calmer energy than caffeine alone. 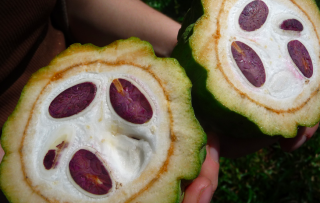 Cocoa flavanols have also been shown to have anti-inflammatory effects helping all sorts of body systems, reducing blood pressure, reducing measures of inflammation such as C reactive protein, increasing cerebral blood flow, and improving the function of blood vessels, particularly in animal studies(link is external). Flavanols seem to enhance signaling to improve neuron regeneration and repair and help long-term memory. They also increase the abiity of the neurons to get fuel and oxygen and to remove waste products better. A randomized trial(link is external) using a placebo in healthy middle aged human subjects showed the administration of high dose cocoa (500mg of polyphenols) improved mood over the course of 30 days.

In the US, chocolate products are the third highest source of dietary antioxidants, whereas chocolate happy countries like the Netherlands and France get huge amounts of flavanols from cocoa. Dark chocolate has cocoa, some beneficial minerals(link is external), and is the way to go if you are rationalizing sweets consumption for better health. A diet rich in all sorts of different polyphenols and flavanols found from eating a rainbow of fruits and vegetables can round out that chocolate consumption and is a safe bet for building and supporting a healthy brain.

*like chocolate, another export from the New World…I recommend penicillin as therapy in lieu of chocolate

1)  In a large bowl set over a saucepan of simmering water, melt the chopped chocolate with the butter, stirring a few times, until smooth, about 7 minutes.

2)  In another large bowl, using a handheld electric mixer, beat the eggs with the sugar at medium speed until thick and pale, about 5 minutes. Beat in the vanilla and salt. Using a rubber spatula, fold in the melted chocolate, then fold in the flour and baking powder. Stir in the chocolate chips.

3)  Scrape the batter into a shallow baking dish, cover and freeze until well chilled and firm, about 2 hours.

4)  Preheat the oven to 375° and line 2 baking sheets with parchment paper. Working in batches, scoop 2-tablespoon-size mounds of dough onto the prepared baking sheets, about 2 inches apart.

5)  Bake for about 4 minutes at 375 degrees, then turn oven to 350 and continue baking cookies 15 minutes, until the cookies are dry around the edges and cracked on top.

6)  Let the cookies cool on the baking sheets for 10 minutes, then transfer to a rack to cool completely before serving.