Lipophilic Statin use Linked to Increased Risk of Dementia 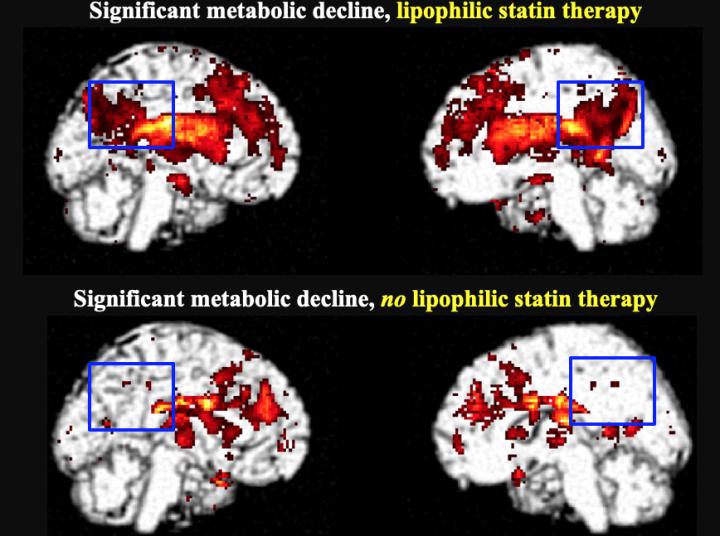 Reston, VA (Embargoed until 7:30 p.m. EDT, Monday, June 14, 2021)–In patients with mild cognitive impairment, taking lipophilic statins more than doubles their risk of developing dementia compared to those who do not take statins. According to research presented at the Society of Nuclear Medicine and Molecular Imaging 2021 Annual Meeting, positron emission tomography (PET) scans of lipophilic statin users revealed a highly significant decline in metabolism in the area of the brain that is first impacted by Alzheimer’s disease.

Statins are medications used to lower cholesterol and reduce the risk of heart attack or stroke. They are the most commonly used drugs in the developed world, and nearly 50 percent of Americans over age 75 use a statin. Different types of statins are available based on a patient’s health needs, including hydrophilic statins that focus on the liver and lipophilic statins that are distributed to tissues throughout the body.

“There have been many conflicting studies on the effects of statin drugs on cognition,” said Prasanna Padmanabham, project head, statins and cognition in the molecular and medical pharmacology student research program at the University of California, Los Angeles in Los Angeles, California. “While some claim that satins protect users against dementia, others assert that they accelerate the development of dementia. Our study aimed to clarify the relationship between statin use and subject’s long-term cognitive trajectory.”

Patients with mild cognitive impairment or normal cognition who used lipophilic statins were found to have more than double the risk of developing dementia compared to statin non-users. Over time, PET imaging of lipophilic statin users also showed a substantial decline in metabolism in the posterior cingulate cortex, the region of the brain known to decline the most significantly in the earliest stages of Alzheimer’s disease. In contrast, no clinical or metabolic decline was found for users of other statins or for statin users with higher baseline serum cholesterol levels.

“By characterizing the metabolic effects associated with statin use, we are providing a new application of PET to further our understanding of the relationship between one of the most commonly used classes of drugs and one of the most common afflictions of the aging brain,” noted Padmanabham. “Findings from these scans could be used to inform patients’ decisions regarding which statin would be most optimal to use with respect to preservation of their cognition and ability to function independently.”

About the Society of Nuclear Medicine and Molecular Imaging

The Society of Nuclear Medicine and Molecular Imaging (SNMMI) is an international scientific and medical organization dedicated to advancing nuclear medicine and molecular imaging, vital elements of precision medicine that allow diagnosis and treatment to be tailored to individual patients in order to achieve the best possible outcomes.