Photo by Alice Pasqual on Unsplash

I’ve never cared for cooked Nappa cabbage, although I use it in cole slaw and Spring rolls.  This salad is awesome and the cabbage is softened a bit by salting and rubbing it.  It’s a great combination of textures and tastes.

Rubbing the cabbage with salt not only seasons it, but also softens the leaves. Pistachios tossed with orange zest and sugar bring an unexpected floral note to the dish. This recipe is from Drifters Wife in Portland, ME.

The 7 Biggest Mistakes You Make When Baking Potatoes

All the ways you tank your ‘taters’

Baked potatoes sit atop the mountain of comfort foods. With a fluffy, melt-in-your-mouth interior and a crispy, salty skin, a perfect baked potato is a thing of beauty.

But for many people, the dream of the ideal oven-baked potato sits just out of reach. What should seem easy — baking a potato in a hot oven — can, and often does, return mixed results: gummy centers, slightly charred skins, or slippery, soggy skins.

No one will say they’re not edible, but could they be better? Yes. And if the steps to make them better are remarkably easy, there’s no reason to suffer sad, shriveled baked potatoes anymore.

Read on to see if you’re committing the 7 deadly sins against baked potatoes, and learn simple tips you can follow to make your next batch of oven-baked potatoes perfect.

You should certainly rinse the potatoes — we prefer russets — to remove any dirt and debris. You can even give them a quick scrub with a vegetable brush. But you need to dry the spuds well after the bath. Excess moisture on the skin can seep into the potato during baking and cause soggy skins.

Do be sure to prick a few holes into the skin, too. While the potato is unlikely to explode in the oven, no one is here to take risks with dinner. Err on the side of caution.

2. You wrap the potato in foil.

Don’t be ashamed if you do this — many cooks believe it to be the key to the perfect baked potato. But turns out you’re ruining the skin if you do this.

The ideal baked potato skin relies on a certain amount of dehydration and rehydration — we’ll get to that. If you bake in foil, all the moisture from the potato just circles back into the potato skin, which can leave you with a sad state of skin.

No, once you’ve washed and dried the potatoes, leave them be. No wrapping.

3. You don’t use a wire rack under the potatoes.

Potatoes need to cook all the way through, and the best way for that to happen is to make sure the hot air can get to the potato from all sides. If a potato bakes with one side touching a sheet pan, you’ll get a hard spot and possibly uneven cooking.

Place a thin wire rack inside a rimmed baking sheet. Line up your spuds, side by side, and place the pan into the oven. Make sure there’s a little room between each potato before closing the oven door.

Low and slow—that’s the mantra of the Perfect Baked Potato. If you’ve got the time to spare, cook the potatoes at 300°F for 90 minutes. If you need to speed that up, bump it to 450°F for 45 minutes. (Note: Your baking time will vary depending on the size of your potato and how hot your oven runs.)

But don’t go hotter than that. There’s no victory in cooking potatoes at a temp greater than 450°F. They might be done a bit faster, but the high heat temp will leave you with overly browned skins that might even char in spots. And since the whole point of a perfectly baked potato is to have skins as delicious as the fluffy interior, there’s no charring allowed.

5. You don’t take the potatoes’ temperature.

You know when meat is perfectly cooked by measuring the internal temperature; the same is true for baked potatoes. Use a probe thermometer to measure the temp of your potatoes. You’re aiming for a temp in the sweet spot between 205°F and 212°F. Below that, the texture may still be too dense, and above that, it may become a gummy mess.

Skip rubbing your potatoes in oil and salt until the end of the cooking time. That’s when they’ll deliver the most texture and flavor benefit for the spuds. If you oil them up early, the skins may not turn crispy. The salt, too, can run off the potatoes in the heat.

Instead, do a quick oil baste after the potatoes reach 205°F: Remove the pan from the oven. Brush with olive oil (or bacon grease if you have it) and a hefty sprinkle of kosher salt.

Return the pan to the oven for 10 minutes — the temperatures of the potatoes won’t climb more than 2 or 3 degrees in that time. The oil will crisp up the skins that were dehydrated during the long bake, and the salt will add delectable flavor.

7. You let the potatoes cool before cutting.

Unlike meat, potatoes don’t get better by resting. They need to be sliced open immediately. If you don’t, they will retain water from the still-steaming center and turn dense and gummy.

Quickly jab a serrated knife through each potato as soon as the pan has cleared the oven. Give them a gentle squeeze (with a hot-temp glove or towel) to create a vent.

Then you can gather all your fixings and call the family to the table. The potatoes will have cooled just enough by the time everyone gathers around to enjoy dinner — and marvel at your perfectly baked potatoes.

Kimberly’s favorite hobby is grocery shopping. Her second favorite hobby is realizing she already had two of the foods she just bought. Will bake. Won’t grill. Can caramel. Find her at khollandcooks on Instagram and on Allrecipes.

I made this last week for the clients and I am now SO addicted!  I always have a batch of some kind of Cole Slaw as it is a great salad and prebiotic. Actually I should say I always have Pressed Salad.  I prep my veggies and then put them in a salad press for 5 or 6 hours. It removes a good bit of the moisture and allows the dressing to not get watered down.

Posted: May 1, 2019 | Author: Millie Barnes | Filed under: Food and it's Impact on Our Health, Recipes | Leave a comment

I feel kinda bad for cucumbers. Thanks to the world’s obsession with its famous cousin, the versatile zucchini, people are zoodling their lives away without even giving the cuke a fair shake. Well, sorry zucchinis, but cucumbers have some impressive qualities, too. And one of them is their ability to make you want to ditch the kale for a salad that’s crunchy, satisfying, and super-hydrating.

Cucumbers are typically used as a salad topping, but there’s no reason why they shouldn’t be the star of the show. A large cucumber contains 2 grams of protein, 2 grams of fiber, and a solid amount of vitamin C and vitamin K, magnesium, and potassium, which is known to help with bloating (something kale commonly causes). On top of that, since cucumbers are 96 percent water, eating them makes it easy to stay hydrated.

To take full advantage of the many benefits of cucumbers, create some hearty salads you can devour all season long. 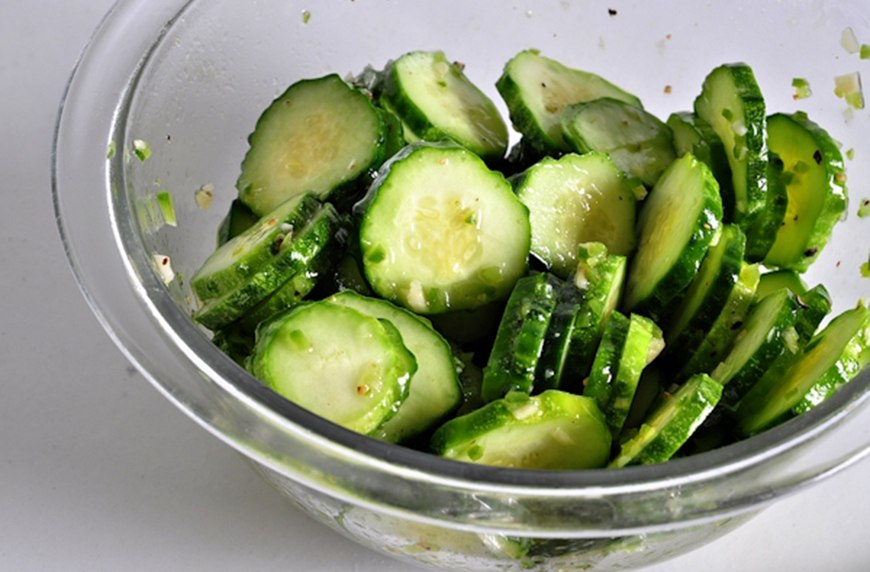 If you like a little spice in your life, this cucumber salad featuring finely-diced jalapeños is a winner. Combined with zesty lime, your taste buds are in for a treat.

Give your cucumbers a Thai twist with this quickie salad that’s loaded with red onion, lemon juice, cayenne powder, and chopped peanuts.

To satisfy both your sweet and spicy cravings, whip up this cucumber salad that contains ingredients like rice vinegar, red pepper flakes, and diced red onion.

For the ultimate hydrating cucumber salad, add in some other refreshing veggies too: cherry tomatoes, radishes, and red bell pepper.

This cucumber salad ups the flavor with wakame, a type of seaweed that brings on plenty of health benefits. It’s been shown to help fight off cancer, decrease your risk of heart disease, and provide mental health-boosting omega-3 fatty acids.

Orange chicken is traditionally served over white rice, but you may substitute sides as you like. Some pairing suggestions include sautéed spinach, steamed broccoli, rice noodles and vegetable spring rolls.

This simple,  high-temperature cooking method condenses both the sweet and savory qualities of sweet potatoes.