Posted: February 18, 2015 | Author: Millie Barnes | Filed under: Food and it's Impact on Our Health, Recipes |Leave a comment 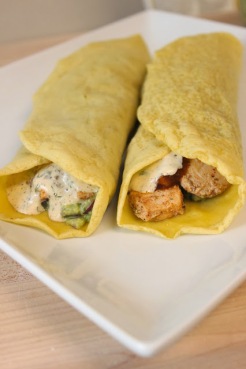 Giving up gluten 28 years ago was challenging, but not anywhere near as hard as giving up corn.  At the time everyone said that corn had no gluten.  However, every time I ate it the fibromyalgia symptoms came back…the tiredness, the muscle aches.  So I gave it up.  Shortly afterwards I began working with two families who had autistic children.  Both of them were still eating corn and as soon as we removed it from their diet they improved dramatically. one three year old spoke for the first time!!

Years later I still miss tortillas and chips.  I have made some that were gluten free but they were still made with grains.  So when I saw this post on CupcakesOMG! I had to try them.

I’m thrilled to say they are awesome and were still good later that day and the next day.  Sometimes baked goods that are gluten free are only really good fresh.

Melissa, the owner of the blog,  says, “So far, I’ve eaten these tortillas as fish tacos, breakfast tacos, lunch wraps (with like, lunch meat and shit in them), and almond butter honey roll ups–DESSERT!!!! And the thing is, there are countless more options! What about eating it like a pizza and topping it with some marinara, prosciutto, and olives? Or rolling it up with a bit of coconut whipped cream and cinnamon apples for a warm, crepe, fall-themed breakfast? And, omg, I don’t mean to get crazy here, but what IF you filled it with a little almond butter, Enjoy Life chocolate chips, and…some sliced banana?!?! I know, I know…I’m out of control right now”.

Take a look ate her wonderful blog and try these!  I made them with butter instead of coconut oil. I prefer it for it’s depth of nutrients. I also added a teaspoon of toasted cumin and garlic powder.

1. Add all ingredients to a blender and blend well.

2. Heat a 6 or 8 inch iron frying pan. Add about 1/4 of a cup, maybe less, of batter to the pan and swirl until it completely coats the pan in a thin layer (you want to make these thin, like crepes, or, I dunno, tortillas!). Cook for about a minute or so or until the size start to peel away from the pan, then, using an offset spatula, flip over and cook on the other side for another minute.

3. Remove from the pan and allow to cool on a cooling rack for a few minutes.
4. Store in a covered container in the refrigerator. They keep pretty well for about a week. Reheat for 20 seconds before using.