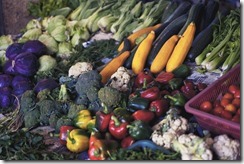 Although I started my business 36 years ago to help people who had severe food allergies it quickly grew to thirty clients within a few weeks. The word got out that although my service was lactose and gluten free it certainly didn’t taste plain and the meals appealed to a very wide range of people whether they had allergies or not.

There were a few times over the years where I stopped doing the service for awhile and worked in kitchens around Jacksonville. One of the things I realized very quickly was this way of eating was absolutely perfect for diabetics. I’ve always leaned toward low glycemic and this is ideal for someone who has to watch their blood sugar. And even if you’re not diabetic it turns out watching your blood sugar helps with blood pressure, cancer, heart disease and other health problems.

This was really brought home about six years ago when a friend of mine on Facebook kept posting consistently that he could not get his blood sugar regulated and that his diabetes was out of control and his doctor was really worried. So I reached out and offered to help him. He replied that there was no way that he could afford to work with me. It took me several times of offering to work with him for free or for barter where he accepted my help.

So two mornings later he came and met with me for a few hours then we talked about how he had been eating. He told me that he was eating exactly the way the Diabetes Association recommended he eat, but that it was not working. In fact he told me he was taking Duval counties agricultural departments class on diabetes and that he just wasn’t working for him. So we talked, I gave him an exact way of eating and he headed out to go to the grocery store.

So about 11:30 the next morning he called me and he was in tears. He told me for the first time in six years that after breakfast his blood sugar was in the range it should have been in. He continued to do better and told me that the following week he went back to the class at the agricultural department. He was very excited to share what he had learned and how well he was doing. He asked if they would be interested in me coming in and talking to them and sharing my knowledge. They told him they weren’t interested.

I can tell you that four months later his doctor was blown away at the next visit and that he was able to go off of insulin. He said when he went to see his dentist that his dentist was thrilled at how much better his gums were doing and his overall health.

On one of our later visits I asked him if he had a copy of the flyer that he had gotten about the class that he did. It turns out it was a trifold pamphlet put out in tandem with the American Heart Association and the diabetic association. The last page gave the diet that they recommended. What they recommended was oatmeal for breakfast. Oatmeal is a grain and derives almost all of its calories from carbohydrates. If you add a healthy serving of fruit you drive that carb load up even further. The other meals were just as deficient.

What our government tells us to eat every day as a crock and is based on heavy lobbying from the food industries. I’m sure everyone remembers when Oprah was sued by the beef board in Texas for saying on her TV show that she did not eat beef. She had to move her show to Texas and spend several weeks defending herself. It cost her lot of money to do so and she won that suit. Because she has the right to say whether she doesn’t eat beef or not. And the science shows us that beef is not that healthy to eat very often. Oprah knew it at the time and we all know it now. But this shows the power of the lobbying forces and the food industry. We should all be very wary of their recommendations and go back to eating real food and stop eating products.

In most cases if you use insulin, you can go back to oral medication and diet to control your blood sugar. If you are on oral medication, you most likely can go off of it aster beginning to eat correctly.