The Truth About Cholesterol

Posted: January 18, 2021 | Author: Millie Barnes | Filed under: Food and it's Impact on Our Health |Leave a comment

Cholesterol is one of the most feared molecules in the world today.

Yet new research shows it’s one of the most beneficial molecules for your health.

How does everyone have it so backwards?

First off, this is not medical advice. If your LDL is above the reference range, you should work with a doctor. Before making any dietary changes, always consult with a healthcare practitioner.

How Did We Get Here?

All three ultimately led to the diet-heart hypothesis and Food Pyramid.

Cholesterol was the critical second link of the diet-heart hypothesis. The hypothesis was that saturated fat increased cholesterol. And based on the studies above, that cholesterol then caused heart disease.

But we convicted the wrong enemy.

The Truth About Cholesterol

All three studies used to convict cholesterol would turn out to be flawed and corrupt.

The 1913 study on cholesterol by the russian scientist was on rabbits. Rabbits are herbivores. Of course they react negatively to cholesterol.

Ancel Keys cherry picked seven countries out of 22. After including all the countries there was no correlation. 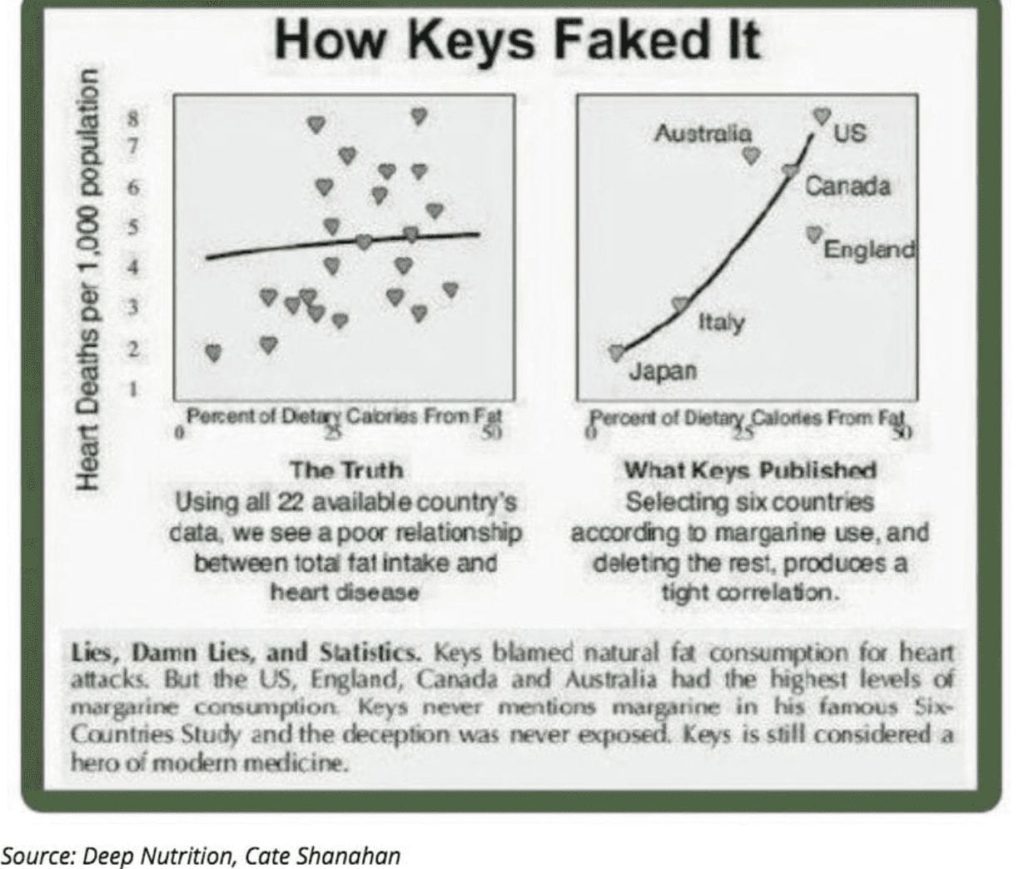 There was not a shred of truth in any of the three studies.

A 30 year follow up to framingham actually showed a negative correlation between cholesterol and disease.

So of course the USDA and health authorities backtracked on their cholesterol recommendations and saturated fat vilification right…? Of course not. They doubled down and still recommend people limit saturated fat.

Studies Confirm LDL and Total Cholesterol Are Not Risk Factors

In 1987, a thirty year follow up to the Framingham study was conducted — the study that crucified total cholesterol in the first place.

Those aged between 48 and 57 with cholesterol in the mid range (183-222 mg/dL) had a greater risk of heart attack than those with higher cholesterol.

They also found that “for each 1 mg/dL per year drop in serum cholesterol values, there is an 11% increase in both the overall death rate and the CVD death rate.”

In fact, there are zero studies that show that high LDL is a risk factor, independent of triglyceride levels and HDL levels.

What matters is the functioning of your lipid and energy transport system.

And a big reason why there is often a correlation between LDL, HDL and heart disease is because they are potentially indicative of a broken system.

And you know what? New scientific research confirms this.

In fact, some studies show that higher LDL-C is associated with equal or greater lifespan .

When it comes to total cholesterol, a study in Hawaii found the same. Having low cholesterol for a long time actually increases risk of death: 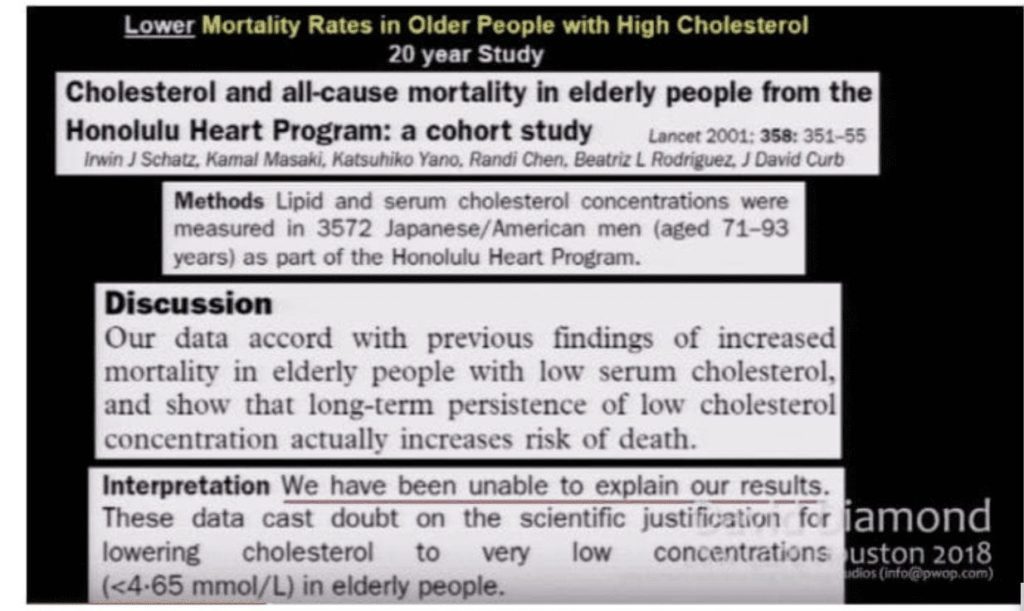 Instead of continuing to dig their heels in, I do appreciate the honesty of the study above: “we have been unable to explain our results”.

This study from UCLA showed that 75% heart disease patients had LDL below 130 mg/dl — the level at which doctors prescribe statins. 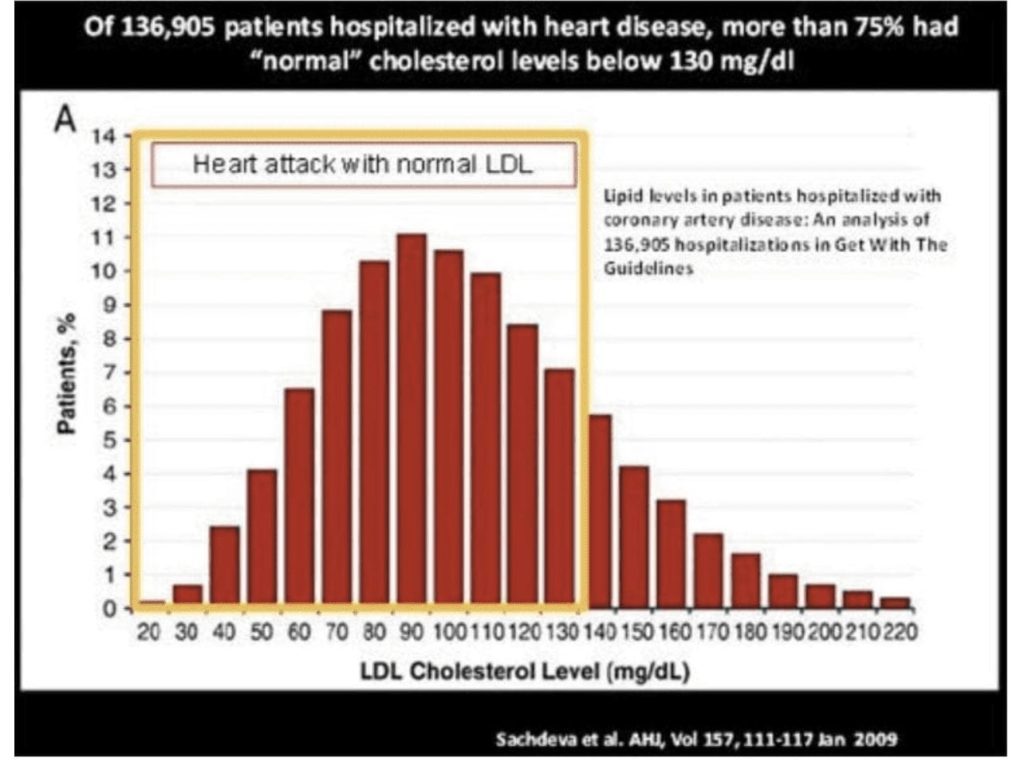 The above data shows that saturated fat can raise cholesterol. But no evidence has shown that, independent of other factors, high  cholesterol is a cause for concern.

New evidence continues to pile up that cholesterol alone is not the culprit when it comes to heart disease. And that lowering it is not necessarily beneficial (in fact in some cases it can cause more damage).

In 2019, the BMJ reviewed 22 interventional trials and found that “‘The preponderance of evidence indicates that low-fat diets that reduce serum cholesterol do not reduce cardiovascular events or mortality”

In the recently unearthed Minnesota Coronary  experiment researchers lowered cholesterol like they intended by 14%.

This study was BURIED for 40 years. 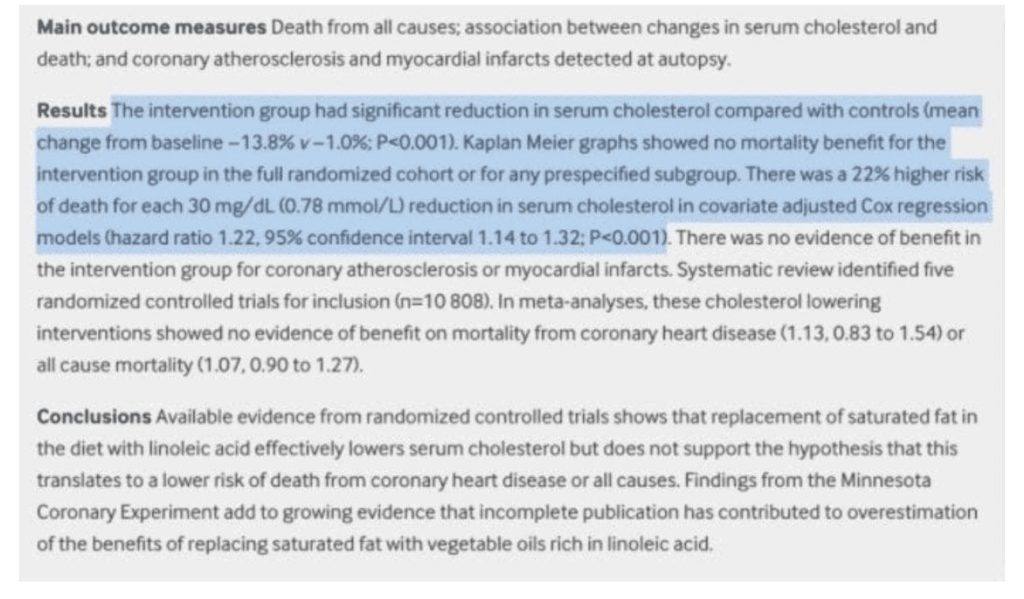 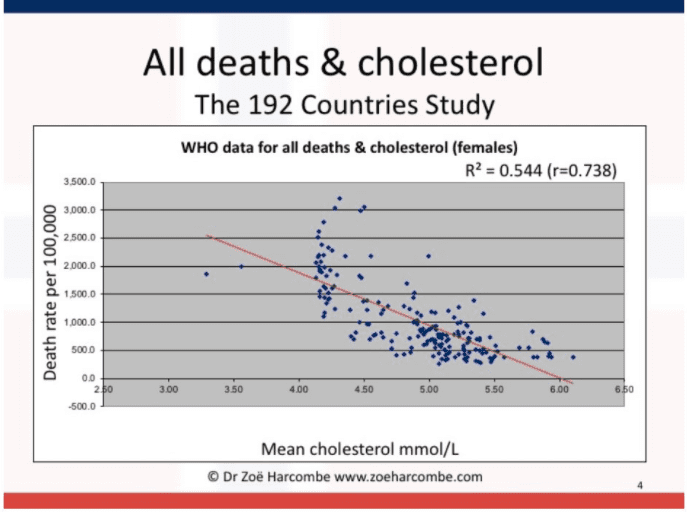 What BioMarkers Are Predictive of Heart Disease?

Yes, cholesterol is present in the artery walls of heart disease patients.

But it’s because it was there to rescue their artery walls.

It’s like condemning firefighters for starting fires just because they’re present at all fires. The logic is completely backwards.

What matters is how the fire started in the first place.

LDL, the “bad cholesterol”, is not predictive alone. Of course not. Because it is not inherently harmful. It’s only indicative of an atherogenic environment when it’s coupled with inflammation and oxidation.

What is the signature of inflammation and oxidation?

But an increase in triglycerides/HDL ratio doubled the risk of heart disease. 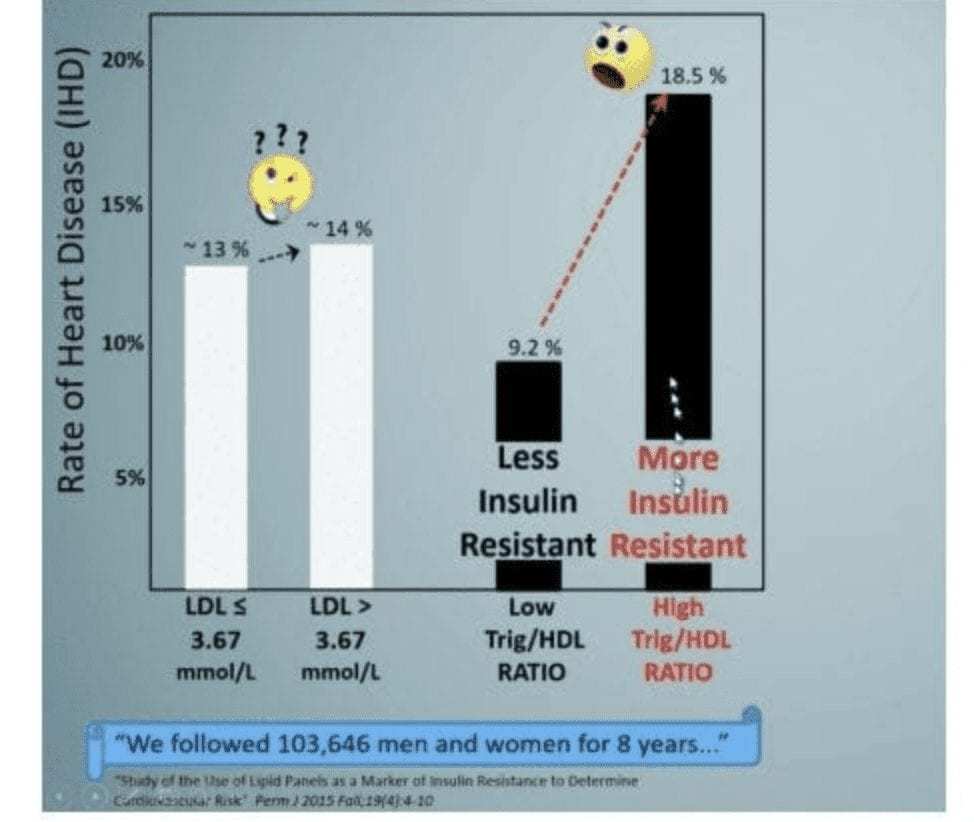 High triglyceride/HDL ratios are indicative of high remnant cholesterol, which is a better indicator for heart disease than LDL alone .

Dave Feldman showed below that remnant cholesterol correlated highly with all cause mortality.

And guess what is significantly associated with remnant cholesterol? Insulin resistance .

When it comes to biomarkers, I like to see:

LDL, the “bad cholesterol”, is nowhere to be found…Why?

Make sure to also keep an eye on fasting insulin levels.

From the great Ivor Cummins: When insulin is low, high LDL particle count and high triglycerides don’t indicate that you’re at higher risk.

But when insulin is high, the risk of high triglycerides and high LDL is magnified.

When fasting insulin is  >15 uU/mL, your risk of heart disease with the same triglyceride levels go up 6.7x. And with the same LDL-P levels, it increases 11x.

Too Little Cholesterol is Worse Than Too Much

Cholesterol is an organic molecule found in cell membranes and most tissues. It’s in the food we eat and is naturally occurring within our bodies.

Of the cholesterol present, around 75% is created in our bodies, and 25% is ingested.

Cholesterol is one of the most vital compounds in our bodies. So vital that our bodies make around 3000 mg of it every single day. We can’t leave it to chance to get it externally – it’s that important.

Without cholesterol, we would literally be dead.

Cells would disintegrate. We’d have no hormones, no brain function, and no muscles. Every cell membrane is constructed out of cholesterol.

All of the following critical body components are made from cholesterol:

Not having any cholesterol is MUCH worse than having too much of it. 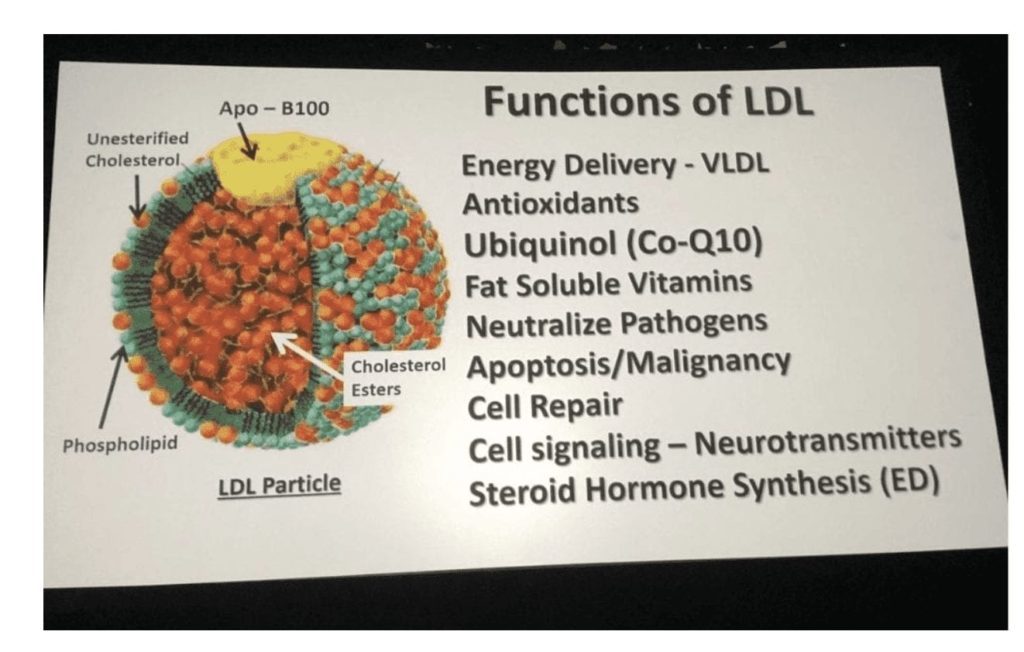 Cholesterol is one of the most important molecules in your body. It is not a direct etiological agent in heart disease — it is merely correlative because it can indicate fundamental damage.

We’ve talked about a lot here, and I really hope that you get a lot out of this article. It wasn’t easy for me to learn all this information – it took me years to learn about these things and improve my own health.

This article was originally published at www.carnivoreaurelius.com.