New ‘Green’ Mediterranean Diet May Be Even Healthier for You

Posted: January 5, 2021 | Author: Millie Barnes | Filed under: Food and it's Impact on Our Health |Leave a comment 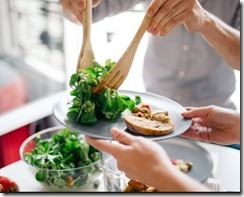 That’s according to a new study published online in the journal Heart.

The researchers randomly assigned 294 sedentary people with moderate obesity (defined as a BMI of 31) into three dietary groups.

A significant majority of participants were male. Their average age was 51.

Their menu was low in simple carbohydrates, rich in vegetables, and with poultry and fish replacing red meat.

The third group received all of the above, plus 3 to 4 cups of green tea as well as 28 grams of walnuts per day.

The cubes were taken as a green plant-based protein shake as a partial substitute for animal protein.

The study authors said in a press release that their findings suggest further limiting meat intake while increasing plant-based, protein-rich foods may benefit the cardiometabolic state even more.

And it may reduce cardiovascular risk beyond the known beneficial effects of the traditional Mediterranean diet.

After 6 months, the “green Med” diet surpassed the other two dietary plans in associated health benefits.