The Case Against the American Front Lawn

July 4th is a time when American families across the country congregate in their backyards for fireworks and burgers. Conspicuously absent from the revelry is the front yard. When you think about it, unless you’re on the local parade route, no one really hangs out in the front yard. And it’s not for lack of space.

The American suburban landscape is dominated by homes set far back off the sidewalk, separated by a front yard almost exclusively of grass, an ecologically barren monoculture devoid of flowerbeds or shrubs. (In lush places like Washington, there will be a few azaleas and a handful of trees, of course, but in newer developments even trees are a scarcity). And in most areas, people don’t seem to actually hang out or play on their front lawns; often, the only human activity you see is the homeowner or landscaper engaged in noisy and tedious lawn maintenance and mowing.

So why do Americans have such big front lawns?

In most municipalities, builders are actually required to adhere to rigid "setback” requirements and subdivision codes, meaning that residents are stuck with a big front lawn whether they want it or not. According to The Old Urbanist, $40 billion is spent on lawn care each year across 21 million acres of grass — that’s the size of Maine, by the way. That’s a lot of money for land you never actually use.

But America’s love affair with the front lawn has deeper cultural roots that reflect a tension in our national psyche between our desire to stand out as wealthy landowners and our penchant for cultural conformity and egalitarianism. New York Times journalist and author Michael Pollan in Why Mow? The Case Against Lawns, posits that it all began as a reaction to our English roots. In 19th century England, lawns were the exclusive domains of vast wealthy estates. Suburban planners and reformers responded by slicing the American landscape into quarter-acre bundles for the middle class. The front lawn was the stage upon which Americans could spotlight the ultimate symbol of democratic and economic success: the home. Everyone could have a mini-estate of sorts, set off grandly from the road. Yet, lawns also became a symbol of community and equality; with each yard carved out in a cookie cutter fashion to create a better communal tableau along the street.

This obsession with a neatly trimmed front lawn really took off in the post-War 1950s, when the American suburban dream of homeownership joined forces with new power mowers and a chemical trifurcate of pesticides, herbicides and fertilizers. This was when the front lawn became less about our national pride in economic mobility and more about a kind of coercive suburban conformity. According to Turf Grass Madness: Reasons to Reduce the Lawn in Your Landscape, “No longer a status symbol of the rich and famous, front lawns became the measure of a middle-class family’s ability to keep up with the Joneses.” Abraham Levitt (whose son William, creator of Levittown, NY, is considered the father of American suburbia) wrote that “A fine carpet of green grass stamps the inhabitants as good neighbors, as desirable citizens." Communities began mandating that every home maintain uniformly trimmed lawns; failure to do so was seen as subversive and anti-community. According to Pollan, there is a Puritanical basis to the homogenization of American lawns. The designer-reformers were "like Puritan ministers, laying down rigid conventions governing our relationship to the land.”

For members of the “anti-lawn” movement (yes, there is one), the American front lawn is not only boring and uninspired but an under-lamented environmental hazard, as lawns receive on average more pesticides and herbicides per acre than any other crop, according to Pollan. And a New Yorker article, Turf War, points out that these lawn chemicals, of course, end up in our streams and lakes, creating “dead zones”. And then there is the issue of water usage. The EPA estimates nearly a third of all residential water use in the country foes toward landscaping our lawns.

Anti-lawn crusaders advocate abolishing antiquated “setback” laws. They urge residents to plant trees, flowers and vegetables or simply ground cover on their grassy lawns. Ironically, perhaps we should cast our eyes back to the Old World for some inspiration. In most European towns and suburbs, homes are set much closer to the road, with a much smaller front garden dominated by functional patios, hedges and fences. In European yards, a grassy lawn is not the focus but merely a backdrop for flowerbeds, trees, lawn games and social gatherings. The spacious private yard lies in the rear, where families play, eat and socialize. The Old Urbanist illustrates through a series of photographs the dramatic difference between yards in European suburbs and American suburbs, making a compelling argument against the American lawn tradition.

For ways to make your lawn more aesthetically and environmentally robust, read Turf Grass Madness: Reasons to Reduce the Lawn in Your Landscape.

Millie- I recently moved to a new house, only about a block and a half away…but a big part of the decision to move was a very low maintenance yard.  The back yard has huge oak trees with ground cover (Ivy, ferns) instead of grass…  There is very little shrubbery. I have already planted low water flowers; lantana, Plumbago, Purple Queen.  I moved my barrels with sweet potatoes from the other house…thank goodness I grow in self-watering containers that were easy to move.  I have Swiss Chard going, Dill, tomatoes, lavender, cucumbers.  I am sprouting onions and planting a kitchen herb garden…I’ll post pics soon…. 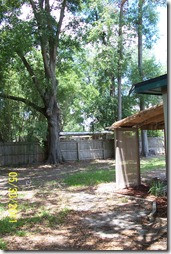